Accurate diagnosis and treatment of ovarian cysts are important aspects of proper reproductive management for any dairy herd. While the negative effects of ovarian cysts on normal estrous cyclicity, conception, and prolonged calving intervals are evident; determining which type of cyst is on an ovary (follicular, luteal, or even a cystic corpus luteum) can be difficult. Diagnosis of each type is important as the proper treatment for follicular and luteal cysts differs, and use of ultrasound is the best tool for achieving this.

Let’s characterize each type of ovarian cyst and describe the benefits of ultrasound to diagnose them. 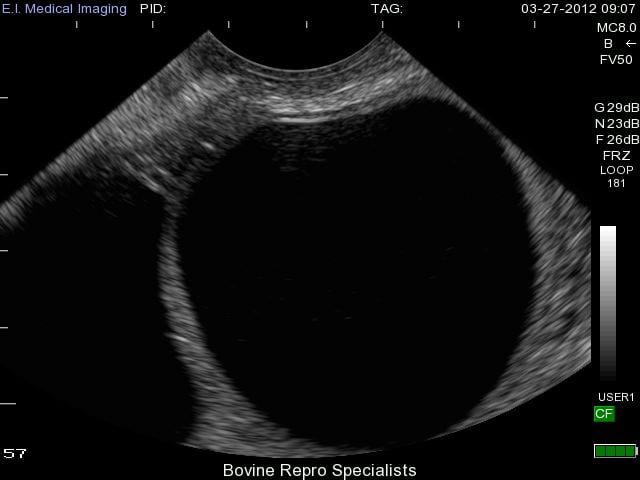 As you can see, diagnosis of this type of cyst is clear with use of an ultrasound, and the presence of a second follicular cyst is evident on the left side of the ovary as well. Rupture of these cysts is quite easy from rectal palpation, which can traumatize the ovary leading to hemorrhaging, and possible adhesion formation on the ovary. The less invasive approach of using an ultrasound can reduce the chances of rupturing follicular cysts, and also is extremely effective to determine whether the cyst is active or benign. Palpating any other structure on an ovary is extremely difficult when a cyst is present, so many times an active corpus luteum is not found on the ovary along with the cyst. An example of this is shown below where the cyst is very prominent on the left side of the ovary, but can be classified as benign due to the corpus luteum sitting to the right of it.

While the causes of follicular cysts are unclear, their development has been linked to genetics, nutritional factors of under- or over- feeding, high milk production (increased steroid metabolism), and stress. However, there is a major theory for how the above factors may cause the formation of follicular cysts. An ovulatory follicle begins to produce large amounts of estradiol, which targets the hypothalamus of the brain and triggers the initial cascade to cause ovulation. It’s believed that there is poor communication within this cascade that inhibits ovulation leading to follicle persistence and follicular cyst development.

Hormonal treatment of a follicular cyst with GnRH (human chorionic gonadotropin has also been used) will generally cause the cyst to luteinize and subsequent treatment with prostaglandin F2α will resolve the luteinizing cyst by triggering luteolysis.

Luteal cysts are believed to develop from follicular cysts that have continued to develop into their later stages. They often progress into luteal cysts by forming a thicker wall of luteal tissue around their outer edges as shown in the image below. You can also see a very slight bit of white “cobwebs” within the lumen of the luteal cyst where the cyst appears to be attempting to further luteinize. 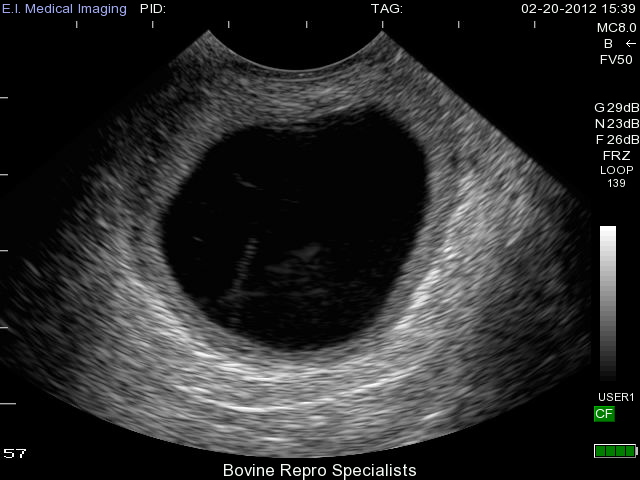 With luteal cysts originating from follicular cysts, the same mechanisms for follicular cysts development described above exist for luteal cysts. The major distinguishing factor between the two is that luteal cysts partially luteinize. Luteal cysts can also have different appearances on the ultrasound depending on the rate of luteinization. This is apparent in the next two images below depicting more examples of luteal cysts. You can see in this first image that luteinization has occurred along the bottom rim of the cyst and again the cobwebs of fibrous tissue are attempting to luteinize the rest of the cyst, but the upper portion of the lumen is still fluid-filled.

This second image is a luteal cyst (on the right side of ovary) in its early stages where the thin outer walls of the cyst still resemble that of a follicular cyst, but the cobwebs are apparent throughout the lumen as the cyst attempts to luteinize. You can see a second cyst on the left side of the ovary as well. 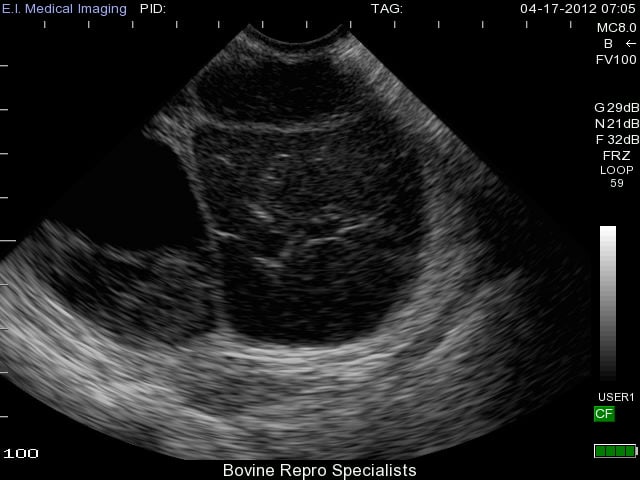 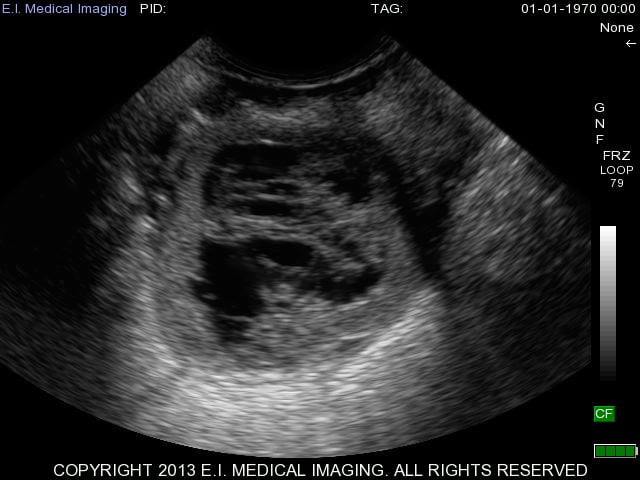 All ultrasound images above were taken with the Ibex Portable Ultrasound and MC8.0MHz transducer. 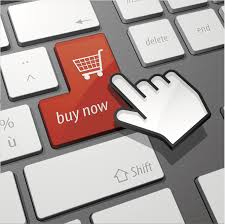 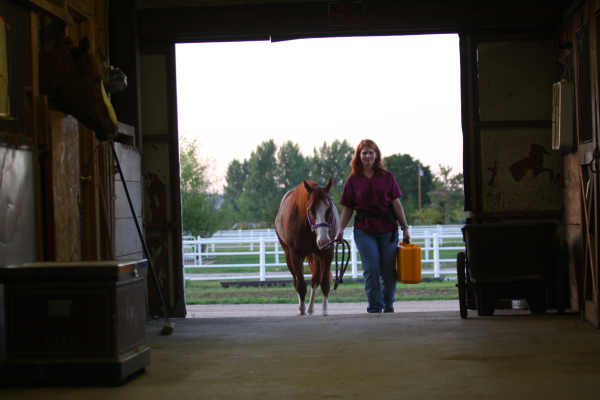