How Does Ultrasound Work?

If you’re new to ultrasound, an image may look like nothing more than a swirling array of grey tones on the screen.  Interpretation requires an understanding of anatomy and physiology, but also of how ultrasound technology functions.

Consider the sonar produced by a bat in flight. The bat emits high frequency sounds, which then bounce off of objects in its proximity and return to the bat. The animal uses the strength, direction, and timing of the returning sound to determine where those objects are and to avoid a collision.

The transducer (probe) of an ultrasound system emits high frequency sound waves, which transmit into the tissue beneath a body surface and reflect off structures along the way. Dense or rigid structures don’t allow the sound waves to pass through, and therefore reflect most back to the transducer. Such structures will create a strong echo, which appears bright white on the screen. By comparison, fluid transmits sound waves flawlessly; no returning signal means fluid appears black on the screen.

Naturally, most tissues will fall somewhere in between, appearing some shade of grey. Fluid with a high degree of cellular debris might look black with floating flecks of grey or white (snowglobe effect). Hepatic or splenic parenchyma will be a medium shade of grey, and the surface of fetal bone or bladder stones will be nearly white.

The time required for the signal to return tells the ultrasound how far that structure is from the probe surface. For example, if there is a long delay from the signal transmission to its return, the ultrasound interprets that as a structure that is situated well below the surface, and therefore it will appear lower on the screen in the image that is produced. 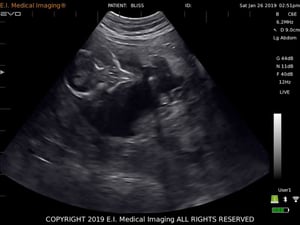 In this image of a pregnancy, you’ll see that the fluid within the uterus is black, the fetal and uterine tissues are varying shades of grey, and the fetal skeleton is white. The top of the image corresponds to the surface of the transducer, while the bottom is the deepest section of tissue being imaged.

Ultrasound Basics: How to Read an Ultrasound Image