Identification of fetal anomalies or accidents of gestation can not be done in a practical manner during gestation without the use of diagnostic ultrasound, and is one of many examples that demonstrate the superiority of reproductive ultrasound over manual palpation and other manners of pregnancy diagnosis in cattle.

This week we have showcased some of the more common disorders seen in the bovine fetus.

Hydrocephalus can be an inherited disorder in some breeds and results in a large cranium with minimal brain tissue. Calves are stillborn or die shortly after birth. Anasarca is a condition characterized by severe edema of all body tissues and resulting in a large, swollen fetus. In cattle, Anasarca can be the result of a recessive gene mutation that also causes pulmonary hypoplasia (PHA—Pulmonary Hypoplasia with Anasarca). These cases are often identified on ultrasound as having a layer of fluid between the skin and body wall, as seen in our example. Mummies occur when there is fetal death for any number of reasons (Trichomoniasis and BVD infections have been specifically implicated as causes), but the CL is retained, the cervix stays closed, and there is no bacteria or oxygen present in the uterus to cause maceration. The soft tissues of the fetus break down and the fluids are resorbed, but the skeletal structure remains (so for this reason, mummification only occurs when the pregnancy has progressed past the embryonic stage and fetal ossification has occurred—about 80 days). Scoliosis is a lateral curvature of the spinal column and may be the result of either an inherited disorder or abnormal positioning within the uterus (in the latter, teratogenic alkaloids have been implicated as a cause).

Schistosomas reflexus: “Schistosomus reflexus, a fatal congenital disorder seen in ruminants, is characterized by severe retroflexion of the spinal column, resulting in positioning of the hindlimbs adjacent to the skull, ankylosis of appendicular joints, and failure of closure of the abdominal wall with consequential presence of abdominal viscera outside the body.” Merch Veterinary Manual These accidents of gestation often result in dystocia requiring surgical intervention or fetotomy. They result in the loss of a calf, the potential loss of the cow, and the time lost on an unproductive pregnancy. By implementing ultrasound, these cases can be identified and dealt with before calving.

Dr. Wierman is Staff Veterinarian
and Director of Education for
E.I. Medical Imaging. 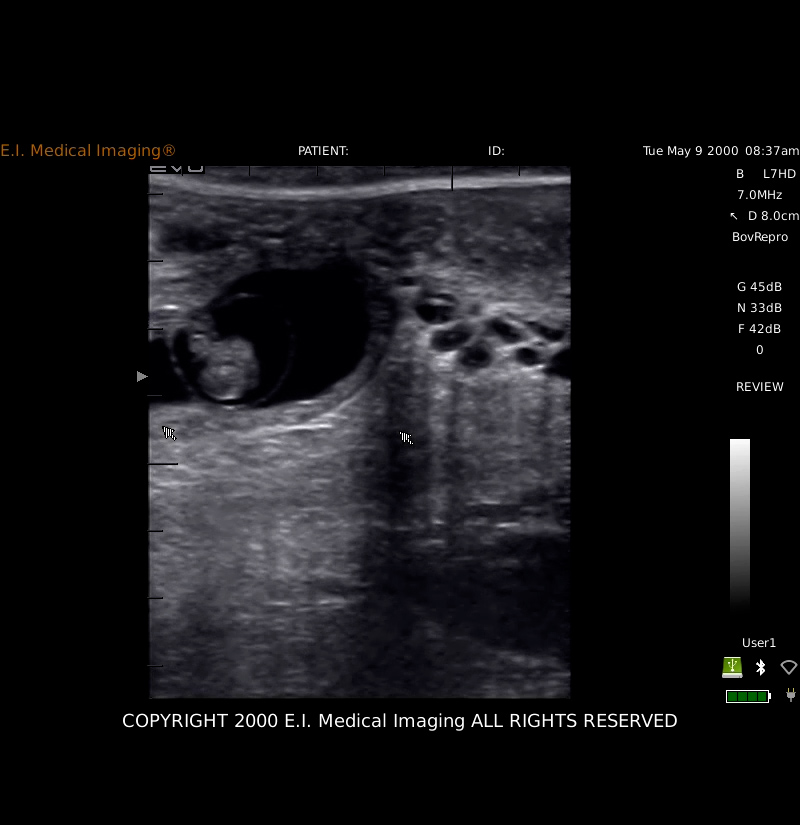